Pokemon Go fever has lit up the United States and countries around the globe. Several Syrian graphic designers have manipulated scenes from the game to juxtapose the cuddly “pocket monsters” with the horrors of war.

At ground zero, the Revolutionary Forces of Syria is using the game to solicit Western aid. Their media office released a series of photos of children, holding images of pokemon with the caption, “I’m from Kafr Nabl in Idlib province. Come and save me.”

Syrian emigrants abroad are also using the game to bring attention to struggles of Syrian people. In Denmark, Saif Tahhan photoshops the game’s interface to draw a harrowing comparison of the the developed world’s challenge to capture digital images of Japanese fantasy creatures with Syria’s real challenge to capture resources for survival of its citizens. (Image at top.)

In Sweden, another Syrian emigrant, Moustafa Jano, inserts the pocket monsters into images documenting the refugee experience to inspire compassion for those struggling to escape Syria’s bleak and dangerous status quo, only to face barriers when arriving to Europe. 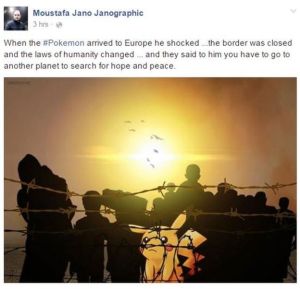 This past August saw a precipitous rise in the public awareness of the deep seated sexism and misogyny within videogame culture. Two events highlighted the chauvinism. First a climax in the hate campaign against videogame designer Zoe Quinn, who was the target of slanderous remarks that her games received good reviews on the site Kotaku from sleeping with the critics. When an actor, most well-known for his role in the Geek classic Firefly, echoed the virulent opinion of these malcontents, he coined the #Gamergate tag and became a spearhead and point of legitimization for the anti-women movement.

More recently, Anita Sarkeesian, an infamous videogame culture critic most well-known for her “Tropes Vs. Women in Videogames” webseries, cancelled her upcoming keynote address at Utah State University after receiving a threat of a mass-shooting at the venue, and the school not taking necessary steps to ensure her, and her audience’s, security.

The videogame community is polarized: on one hand, you have feminists (or feminist allies) who believe that much of videogame culture is misogynistic and wish for this to change by increasing the visibility of games that have more even-handed portrayals of gender. One the other hand, are a select few, but very powerful and well organized, male gamers who believe that women are taking over their artform and calling for the censorship of their favorite games. It is important to note that the goals of one side do not respond or address the goals of the other. In plainer terms, the goals of the sides are not mutually exclusive, as one would believe them to be, considering the fiery opposition and tension between them.

I consider myself in the first camp, but, in an exercise of empathy, let me try to address the calls to action of the polarized, masculine minority. They believe with absolute certainty that women are calling for the censorship of their favorite games. I have no idea from where this idea originated. No artist nor journalist would ever call for or endorse censorship. It is contrary to their self-interest to promote state mandation of art and eliminating free speech. The notion is groundless and only exists to give a fervent fire and invoke the idea of rights being infringed.

This leads us to the first call of action against women who are supposedly taking over the videogame artform, threatening men’s historical and traditional centerplace in this culture. These men are grievously upset by the idea of women-creators in their art.

This is the crux of their argument, and the point from which all the hate starts. Why are they experiencing this emotional response?

Bear with me for a contextual tangent. I studied political science in uni, and during my sophomore year, I studied the United Nation’s Declaration of Human Rights. This document was created on the heels of the Second World War, and was adopted by the UN in 1948. Article 27 in this historical document details a universal right to art. At the time, learning that the UN included such a superfluous right, in the very  same document that mandated a freedom from slavery and torture, mystified me. I agree that art is important, but is it truly that important?

Yes, it is. Art is a type of expression that all individuals utilize. We communicate through our paintings, our songs, and dance. While some artists live and die for their art, no person is untouched by some form of art. It permeates our culture and our lives. On the level of the individual, certain people are inclined towards certain arts: one who has aptitude to visualize three dimensional space may become a successful architect, one who has high color distinction and love of textures may enjoy fashion design, a lover of words may write, and so on.

In the USA, while each person has a right to art and to create, we do not protect all artists equally.  While it is easy to see the community split apart on the lines of race and class, we must not forget that gender also plays its part in shaping of the art community. Men are regularly excluded from the USian art community. How? Simply put, making art, in nine cases out of ten, is seen as an anti-masculine activity. Men who are artists are not as masculine as their non-creative peers, especially in blue-collar culture. This idea is wrapped up with the common preconceived notion that artists, especially those in visual arts, are effeminate or gay. Want to be fashion designer? Painter? Composer? God forbid, dancer? It is hard to partake in any of these forms without your masculinity being called into question by both women and men.

Now, of course, not all artforms in the US are subject to this split, however, the rift does cause pressure on the forms where men are in charge, and in these forms we see a sort of hypermasculinity emerge. In literature. In rap music. And now, in videogames.

As women start invading these roles, these men are, rightfully so, afraid of the idea that their outlet for art will not longer be seen as a masculine occupation of their time and a manly way to utilize their talents. I don’t think that these thoughts are ever expressed in such words, but the undercurrent is there.

These men have a basic human right to art. We have created a society that alienates them from that right, and so they have clung to the few artforms that we allow them to be apart of and maintain their self respect and esteem.

In conclusion, I am in complete support of men being allowed to participate in and create art without their integrity and manliness being called into question. We, as feminists, need to support men in their right to art as much as we support women, and as broadly. If we eliminate the dire need for a male haven of art, we will alleviate the reflex, gut-reaction of right infringement, disenfranchisement, and disempowerment.

“We are programming your websites, making your senior executives look smart, and getting into your schools for free! That’s right, raise the bar! …[We’re] bigger than Japanese in rap songs, and yoga!” from Beau Sia’s “Asian Invasion”  https://www.youtube.com/watch?v=diNLPGHZbGM

While I was working as an English Teaching assistant in an upper-crust, exclusive French high school, one of my students asked “In France, learning about the USA and studying English is cool. What country do Americans think is cool?”

In that moment, the idea of Japan flashed in my mind, but I responded with a generic “no particular nation is favored by ALL Americans. Many enjoy British TV, but there are many other groups of Americans that like films and media from other countries as well.” END_OF_DOCUMENT_TOKEN_TO_BE_REPLACED