ABC News has been monitoring and reporting on the situation in Syria since peaceful protests, inspired by the Arab Spring, escalated into civil war in 2011. More recently, concerns of the impact of war on the civilian population, particularly children, have been the focus of international media and war journalists. Despite a call for increased transparency into war torn areas and the need for aid organizations to be permitted there, many times foreign entities, including press or NGOs, are turned away at the border.

Since this past January, ABC News has been texting with a 30 year old, mother of five who lives in the sieged town of Madaya. This “Madaya Mom” has been an informant for ABC News, giving journalists glimpses into her daily life via text message as she tries to secure food for her children, waits eagerly for UN involvement, and simply tries to ensure the survival of her family in devastating circumstances.

After their video crews were turned away from Madaya a final time, ABC News decided to go a different route to bring visual representation to the story of “Madaya Mom,” which has been documented like a diary on their website. The news conglomerate reached out to Marvel Comics, the graphic novel company who is responsible for the Avengers, Iron Man, and Captain America franchises, to create a visual accompaniment to Madaya Mom’s story. Instantly invested in the idea, Marvel was eager to go “where the cameras can’t.” They recommended Deadpool and Avengers: Civil War artist Dalibor Talajić, who survived the Yugoslav wars in the early 1990s and currently resides in Zagreb, Croatia, to draw the scenes from Madaya Mom’s life “with skill and authenticity.”

Talajić undertook the immense project, a stretch for his creative mind as it had no preassigned script. His visual art illuminates the truth of Madaya Mom’s struggle, oppressed by the “everyday horror of pointless existence” as entities larger than her control her family’s access to food, resources, and efforts to leave the area. Talajić balances the bleak outlook by showing that, despite the dire circumstances, “she is just a mother, and that…is beautiful.”

The completed “Madaya Mom” project is now available for viewing on ABC News’ Website, and includes a page of resources for teachers.

While there will be no instantaneous change in UN involvement, the efforts of Marvel will certainly magnify and increase public awareness for the deleterious conditions in Syria. 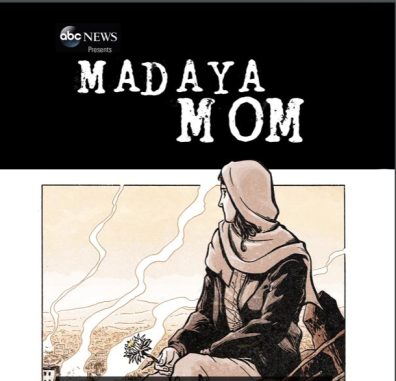